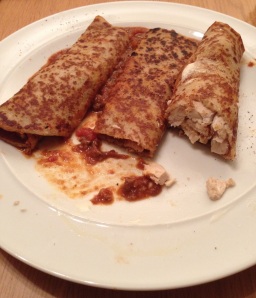 It was never going to be a good idea.

Tesco factory made pancakes full of wheat and milk, together with Waitrose Pre-made Beef Bolognese full of onions and tomatoes. And all that after the Apricot Tarte that I specially bought for my father’s 80th birthday (he loves apricots and tartes so I think I made his day). He insisted I have a slice of, as it was his birthday, and he wanted me to /”make the effort for him”. He then reminded me that he thought all these food intolerances were rubbish, “made up nonsense”, and I was wasting my time going on food exclusion diets in order to overcome my IBS-D (Irritable Bowel Syndrome – Diarrhoea). So to please him, as he was already miserable at getting hardly any cards and having to live for so long in such a horrible, unjust world, I ate the tarte, although I was controlled enough to say no to cream. In case you are wondering the Apricot Tarte was delicious. However, as you may have already guessed, it was the start of a downward slide for my hyper-sensitive gut.

If the Tarte was the only wheat, yeast and lactose I ingested that day, it may have been OK. I probably still would have suffered some increased symptom of my IBS-D. I had, you see, been stuffing myself full of chocolates over the last few days, to numb the increasing emotional pain I was feeling within me. I also fell of the wagon, so to speak, by binge on wheat and dairy filled fancy snack food at a christening last Sunday. My wife was made Godmother to her school friend’s daughter. The service was beautiful (I love old churches – this was 800 years old), but the reception afterwards was my true heaven. Honey Roast Beef slices, smoked salmon with prawns on top, pork and leek pies, goats cheese and sundried tomato quiches. Poppy seed roll bread. My favourite type of seeded bread. All the stuff of my dreams, denied to me by my recent years of exclusion diets. I could have tried to have more self-control. Yet it has been a hard few weeks, in fact months. So I gave in to the naughty demons inside me.

As a drug, not all food works for me. It has to be tasty food. Generally fatty, unhealthy food. Chocolates are one of the best drugs that give me the hit I need to distract from slipping down into a spiral of depression or anxiety induced panic. I have had to deal with a lot of emotional tension, stress and turbulence recently (due to a myriad of financial and family related drama’s that I have done my best to avoid but which have sought me out and keep haunting me). The chocolate hits have helped get me through, in addition to the pork and leek pie, though at a price.

Anyway, enough about the Double Decker bars and Pound shop Thornton’s boxes, back to the pancakes. So after the Birthday Tart slippage, why did I make it worse by devouring the pack of pancakes I bought impulsively as they were seducing me at the entrance to my local hypermarket. My excuse?

It was Pancake day, one of my favourite days of the year. In terms of religious faith I am not a religious man. Food, however, is my religion. Any day or event where the celebration involves or revolves around food is holy to me.

I live to eat. It is the thing that makes me get out of bed in the morning, for breakfast. I push through the drudgery of mornings dreaming of the reward of lunch. After lunch the day is all about getting through to dinner time (hopefully with some tasty snacks in between). When I used to have a very high pressured, fast paced, long hours finance job in central London, the things that powered me on through the day were sausage rolls from Waterloo station in the morning, a Snickers’ bar (Marathon for all you old school Brits out there) for morning break, a large Chili Con Carne lunch from the subsidised work canteen, a can of Dr. Pepper and a bag of Flame-grilled Steak McCoys Crisps for afternoon break and the thought of some overly oily, yet tasty home-made cooked meal, full of marinated meat, made by my equally carnivorous mother.

So that is a very concise summary of why I eat and why eating tasty food that gives me a stimulating hit is so important to me. It is emotional comfort eating, I understand that now, but that doesn’t mean I crave it any less.

This is why I thought milk-based pancakes with Beef Bolognese sauce might be a “good” idea. Aside from the fact that it was a weird combination (I like weird) for a pancake, and my wife thought it was disgusting, I should have known better.

I have cut this post into 3 separate posts to make it easier for people to digest (excuse the very bad pun).

This is the link to Part 2, which continues on from this point (to be updated once the post is published!)

Z is for Zener

on the education of Z-boy, who loves electricity, satellites, and surrealism. Thoughts, ideas, experiences.

A Canvas Of The Minds

A unique collaboration of different perspectives on mental health and life

The REAL lowdown on Life, Love and living with Social Anxiety...

With a little kick of my shoes, i write what i like

Blogging about Mental Health issues, Doctor Who, IBS, Parenting, Food, Virtual reality, and Culture all in one Blog. Seriously!

Travels with the Doctor

My honest stream of thoughts and insights unearthed during the most challenging and eventful time of my life.

My life in London (and its environs). "Delusional if rather sweet" - Samira Ahmed